Boost Your Solar Benefits with Brightbox and SCE’s TOU Rates

A home solar battery system like Brightbox™ gives you clean, reliable energy during a power outage and, it could also save you money by using your stored power when electric rates are higher. Like during those hot summer afternoons when people are blasting their air conditioners to keep their homes comfortable.1

Plus, with Brightbox and Southern California Edison’s Time-of-Use rates, your yearly energy savings have the potential to grow further. Before diving into the details of how Brightbox and SCE’s TOU rates can benefit you and your family, let’s quickly go through what TOU rates are, and the type of plans SCE offers.

What Are TOU Rates?

Time-of-Use rates are pricing structures set by electric companies like SCE, that change depending on the time, the day and the season you use electricity.2

During on-peak hours (early afternoon to early evening), when most people are at home using their devices and appliances; electricity rates cost more compared to off-peak hours (late evening to early morning) when people are already sleeping or have gone to work or school.

TOU rates are becoming a common thing with electric companies across the country, and California is leading the way. According to The Golden State’s Net Energy Metering (NEM 2.0) policy, any homeowner who installs a home solar system in California has to enroll in a TOU rate plan instead of paying single per-kilowatt-hour rates.4

Since SCE’s TOU rates are based on the time, the day and the season you use energy. If you’re able to run your power-hungry appliances, like your washing machine or your dishwasher, during off-peak hours when electricity prices are lower — TOU rate plans will give you better control of your electric bills and the price you pay for them.5

Now, enrolling in an SCE TOU rate plan doesn’t mean you have to stop your energy usage during on-peak hours. By making small changes to your energy habits, like doing laundry in the early morning or late evening, you could reduce your electric bill.

*SCE’s TOU rate plans are subject to change in the future.

Which TOU Rate Plan Do Brightbox Customers Go On?

If SCE’s TOU rate plans change in the future, Sunrun will re-evaluate all TOU plans and choose the one we believe will generate the most savings for our customers.

How Does SCE’s TOU-D-A Rate Work?

SCE’s TOU-DR-SES rate plan offers you more affordable prices at times when there’s less grid demand — before 2:00 p.m. and after 8:00 p.m. on weekdays, and all day during weekends.

**Get the most up-to-date information about SCE’s current TOU-D-A rates.

What Is Brightbox Smart TOU Allocation?

With a TOU rate plan, SCE charges you a higher or lower price depending on the time you use electricity from the grid. But when you have a home solar system with a battery service, like Brightbox, your battery will perform Smart TOU Allocation during on-peak hours in the summer (from June 1 to September 30) to use your stored energy instead of using electricity from the grid. This could help you offset your electric costs and potentially save you more money with each billing period. 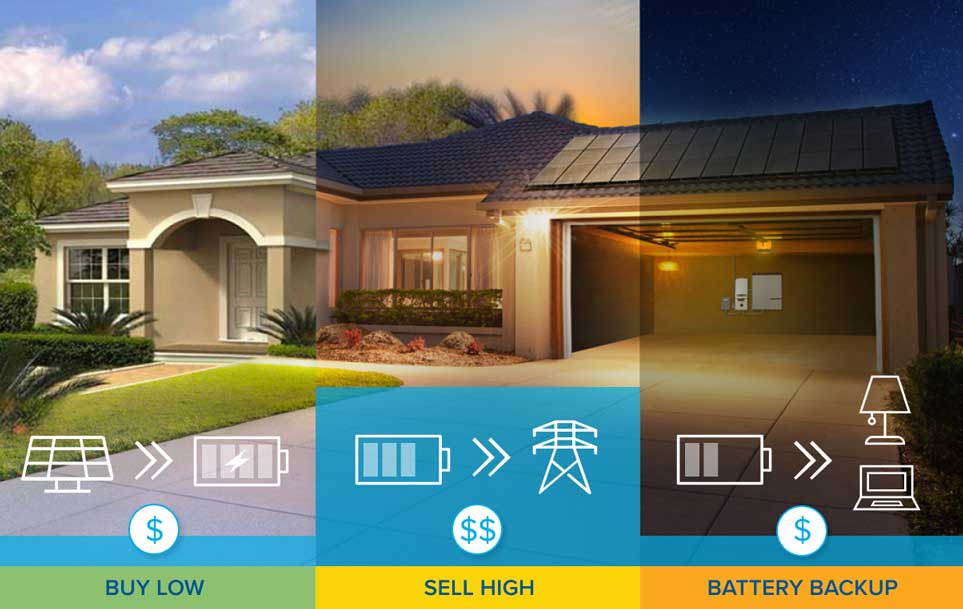 Brightbox only performs Smart TOU Allocation during the summer to give you the most significant savings possible while balancing your home battery degradation.

Similar to devices such as your phone, cordless vacuum, or rechargeable Wi-Fi camera, the more you use your home solar battery, the faster it wears out. That’s why Brightbox only performs Smart TOU Allocation during the summer when your home energy savings are potentially higher than the cost of your battery’s degradation.

Prepare for the Future with Brightbox, Today

If you were to look outside right now, odds are the sun is shining. Think of all the benefits you’re missing out on! Switching to solar energy could end up saving you thousands of dollars on electricity bills during the next 25 years.6

Whenever you want to talk about solar, Sunrun and the California Sun are here to help you change the way you power your life. See if you qualify today.

The content on this page has not been reviewed or approved by Southern California Edison.