How Home Solar And Batteries Can Replace A High Utility Bill

Meet “Jane,” a Sunrun customer in Southern California who represents many just like her across the state.

In the aftermath of the mandatory power outages this year, Jane chose to get a home solar and batteries service plan with Sunrun to help keep the lights on and her food fresh, all while reducing her carbon footprint.

After Jane was one of the only homes with power during a three-day outage, her neighbors began asking about getting a system of their own, but lamented that it was “way too expensive.”

However, Jane, like many Sunrun customers, is actually paying less for the price of power with her home solar and battery service plan than she was before with only utility provided energy. 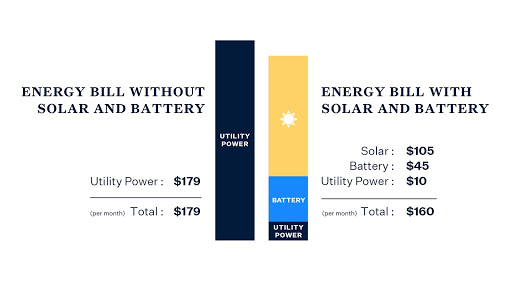 Image 1: Jane’s average monthly energy bill, with and without solar and battery. Note: This data is based on an actual Sunrun customer in Southern California. Prices may vary by utility and region and may include an annual escalator.

The head-to-head financial considerations with legacy utilities bear out: with Brightbox home solar and battery systems, customers are generating and storing their own clean, affordable power, all while lowering their payments to their utility.

Here are some of Jane’s other findings:

She’s still connected to the grid. The majority of the time, Jane is still hooked up to the larger energy grid. Her home is mostly powered by her rooftop solar panels and battery. When she generates more solar energy than she needs, it charges her battery so she can use the energy when she needs it later. After the battery is done charging, she can be compensated for sending extra solar energy back to the grid for her neighbors to use. If Jane is using more energy than she can produce, she can pull from the legacy utility power supply. It is only during an outage that her solar and Brightbox home battery system functions completely independently.

For many customers, solar paired with battery backup will cost you less than what you pay the utility without the technology. As you can see from the image above, even when she adds in her monthly battery cost and the little bit of electricity she still pulls from the grid during times of low solar production or higher-than-usual energy usage, this still is not more expensive than how much she would be paying for energy without her Brightbox solar and battery system.

She didn’t have to pay anything upfront. Jane has Brightbox monthly, which means she didn’t pay a cent to get the battery installed, and simply pays a flat fee of $45 per month* once she has it. That’s it. There are no hidden fees with her battery. Since the battery lasts for about 10 years, she will get more than one throughout her contract for no additional cost. Jane also gets a warranty on the hardware, plus the Sunrun Guarantee for the entirety of her 25-year service agreement.

From a cost perspective, batteries beat out traditional home generators, too. Since the power during outages were Jane’s primary reason for getting home solar and batteries, it was important that she wasn’t paying more than she would for a generator that could also provide backup power. She found that most reasonably-priced portable generators often require repeated refuelings to provide ongoing backup power for even the most basic appliances like refrigerators and lights, and fuel may last only a few hours if you have too many appliances running at once. If your generator runs out of fuel, appliances may turn off, potentially resulting in spoiled food and loss of connectivity, and a standby generator was significantly more expensive than she could afford. The price could be as much as $20,000 all-in -- and even more when considering hidden costs of ongoing maintenance and fuel. The Brightbox home battery just makes more financial and practical sense.

By installing solar and home batteries, Jane is getting cleaner air, lower energy bills, and freedom from the monopoly utility. Be like Jane.

Go solar for $0 down
See if you qualify